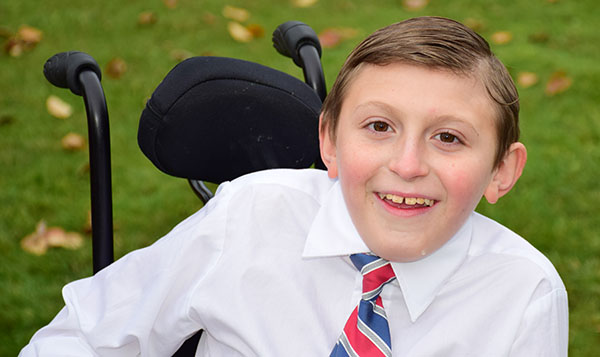 Hadley Pinnow had never been more certain. The first time she saw Hunter, she knew she wanted to adopt him into her family.

Hunter has severe cerebral palsy and has spent most of his life in a wheelchair. His situation was even worse because he was a victim of Munchausen syndrome by proxy — a condition in which someone creates medical problems for a person in their care (in this case, Hunter) in order to gain sympathy and support from others. Hunter suffered from this abuse for years.

The Abuse Nearly Killed Him

Hunter went to the doctor 200 times in one year. He was on dozens of medications. He spent most of his time lying on a hospital bed, being fed through a tube, without any stimulation. When the court finally intervened and removed him from his home, he was near death.

When Hadley saw him for the first time — in a website video about kids waiting for adoption — his gentle, happy spirit captivated her. “The moment that video started playing, I was glued to the screen. He was so gentle with his caregiver, and he was smiling….There was just something about him.”
She admits she didn’t know much about Hunter’s condition or his medical needs, but that didn’t matter. “I think that when you really pray about who God wants in your home, and you know it’s meant to be, you also know you can manage whatever He gives you.”

Hadley and her husband John, a federal aviation structure inspector, have four biological children: Sophia, Noah, Sam, and Ben, who range in age from 12 to 21. They also have another adopted child, Matthew, who is 6, and two foster children.

Hadley laughs when recalling how John was traveling for his job when she saw Hunter’s video. He was also out of town when she first saw Matthew nearly three years ago. Now, when John leaves for a trip, he teases her, saying, “Don’t adopt anyone while I’m gone.” But the truth is that he shares his wife’s passion for hurting kids. Both of them feel it’s a calling from God. Hadley says, “We decided that we wanted to foster children with significant special needs, because they are harder to adopt.”

Hunter fit in well with the Pinnow family right from the start. “He’s just so loving,” Hadley says. “And I know he’s happy. He talks about us as his family and tells me he loves me five times a day. We talk about how God gave him to us. I’ll say, ‘Hunter, do you know you’re amazing?’ and he’ll say, ‘Yeah — God.’ He knows God made him amazing.”

“The Best Decision We Ever Made.”

The Pinnows have had to make some adjustments and sacrifices along the way. Hadley gave up a successful business to care for her special-needs children. Still, there are no regrets. “I am so full of joy. Adopting these kids was the best decision we ever made. Our faith has grown so much. The moment we stopped living for ourselves and started living for these kids, our lives were transformed.”

The Pinnows are grateful for the help they’ve received from Olive Crest — support made possible by generous friends like you. “They’re always there to talk to us and pray with us when we need it,” Hadley says. “I don’t just think of Olive Crest as an organization that places kids in homes. I think of Olive Crest as a group of people who love and support children and families in the community. Olive Crest is making a huge difference in the lives of so many people.”

Asked if she had any advice for people who are considering adopting or becoming foster parents, she said, “They should prayerfully consider who God wants to place in their homes. Don’t make too many restrictions on who you’re willing to take in. I am so in love with every kid we have, and that’s because God brought them to us. It’s not what we chose. God brought them here.”