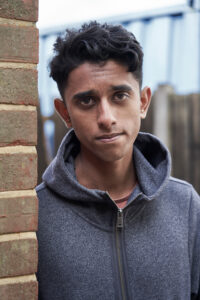 17-year-old Roger is ready to leave Olive Crest. The two and a half years he spent here may have saved his life.
Roger didn’t grow up in a comfortable suburban home. His family was transient. More often than not, they lived in a van. He and his brothers and sisters never got a chance to settle in at one place before they were packing up and moving on to another. With his father in prison, and as the oldest among five siblings, he tried to be a father figure for his family. But the pressure of trying to take care of his siblings soon got him and by the time he was 14, he was in juvenile courts.
Roger was tough. But at Olive Crest he was able to channel his determination towards bettering his life, not just surviving. He pushed himself to complete Olive Crest’s educational and job training programs. He found a job. He dug in at school and got excellent grades. He played junior varsity football and he made friends with his teammates and classmates. He helped his siblings find their way to Olive Crest as well.
Roger is ready to move on. He has a life he’s eager to get to.

SUBSCRIBE for impact in your inbox
Join the conversation ON SOCIAL MEDIA
InstagramFacebookTwitterYoutubeLinkedin
Copyright © 2022 Olive Crest | FEIN: 95-2877102 |  Designed by Luminate Marketing
Privacy Notice
Back To Top