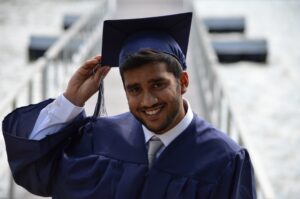 James was in second grade when he first went to live with a safe family. At the time, his mother, Sandra, was having difficulty making ends meet and navigating some complex stressors of life such as unexpected tax payments and job loss. She had been raised in an abusive household and experienced neglect herself, so when James’ father also started becoming aggressive, she sought help.

James and his two-year-old brother, Joshua, loved being with their safe families. Due to a series of unstable circumstances, the boys were cared for by three different Olive Crest families over the years. Even in all the turmoil, they were able to experience the stability of a loving home environment. More than that, these young boys experienced what it meant to have a father.

“They taught me the kinds of things that dads are supposed to teach you,” James recalls. “Things that honestly sound like no big deal, but they really mean a lot. How to shave, how to throw a ball, how to not give up when you get knocked down…I’m just so grateful to God for them.”

It was not easy, especially in the midst of COVID-19, but with the ongoing support of his three families, James finished high school at the top of his class and was accepted into Arizona State University. Although he received scholarships and financial aid, there was a gap which prevented James from attending his dream school. Amazingly, all three of his “safe family dads” came together and agreed to fund his education.

James will enter college this fall thanks in large part to the investment his safe families have made and continue to make in his life. He’s excited about decorating his dorm room, making new friends, settling into college life, and the endless possibilities he now sees for his future. “I’m not afraid of things getting tough again because I know that I have people to call. My life hasn’t been the easiest but I know that my parents will drop everything to help me if I need it. I grew up thinking the word ‘father’ was a bad thing, but now I want to be like these guys I’ve learned from. I hope to someday become a dad to my kids, just like they have been to me.”

SUBSCRIBE for impact in your inbox
Join the conversation ON SOCIAL MEDIA
InstagramFacebookTwitterYoutubeLinkedin
Copyright © 2023 Olive Crest | FEIN: 95-2877102 |  Designed by Luminate Marketing
Privacy Notice
Back To Top