Excitement rang through one foster family and their grade-school-aged boy when his bike showed up at their home. When the mom answered the door, she was ecstatic that the bike was exactly the same as the boy’s recently broken bike – she knew how much her boy would love it. The boy was so excited when she told him that there was a new bike waiting for him in the garage. Because it was just like his old favorite bike, he was especially thankful and joyful! In addition, People Connect made him a personal card that he loved – he even pointed out all his favorite parts of it.

Two other boys just entering foster care had birthdays approaching quickly. While the boys, their biological mom, and their foster mom were at court, the two moms met each other for the first time. The boys’ biological mom was heartbroken that she was going to miss their birthdays and worried that they would not receive any gifts. The foster mom reassured her that Olive Crest provided the boys with brand new bikes – and the biological mother burst into tears. She seemed to believe that she and her boys were truly valued and cared for, as she hugged the foster mom and thanked her and Olive Crest repeatedly.

Thank you again to People Connect and Together We Rise for making these beautiful moments possible! 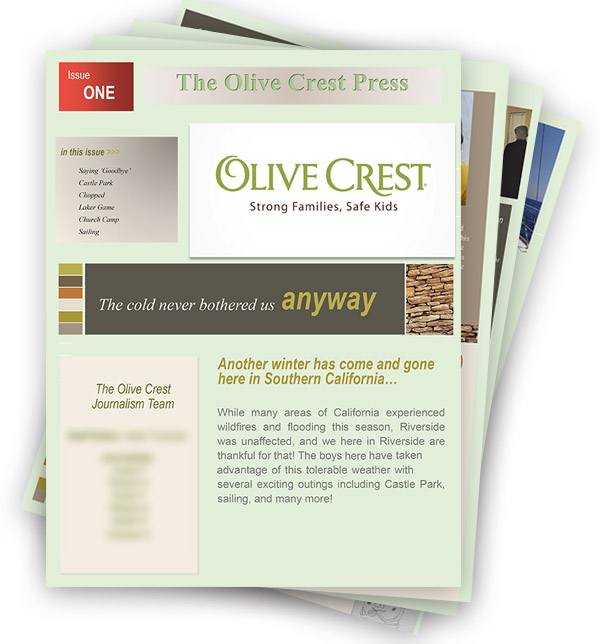 Every day, at-risk kids and teens get the support they need through counseling, safety, and more…because of your support. New activities can play a part in healing, as well—and some of our group home teens have been tapping into their creative side by writing and putting together their own newsletter, The Olive Crest Press. The articles share their learning adventures—as well as some insights they have gathered along the way.

One young man wrote about a mountain trip, saying, “The reason I went to this place was not because of how it looked, or if there were girls there…I went up there to meet God, to allow Him to find me. I was lucky to have the opportunity to go up to that mountain….He did find me.”

Another shared an experience on a boat trip: “The journey back is never a disappointment, but rather a lesson in disguise and everybody for one reason or another seems to understand that at the end.…The crazy thing is even though we’re going to do the same thing next month, the experience is gonna be totally different. That’s because sailors adjust their sails.”

These experiences and the opportunities for growth that they offer would not be possible without your support. Thank you! 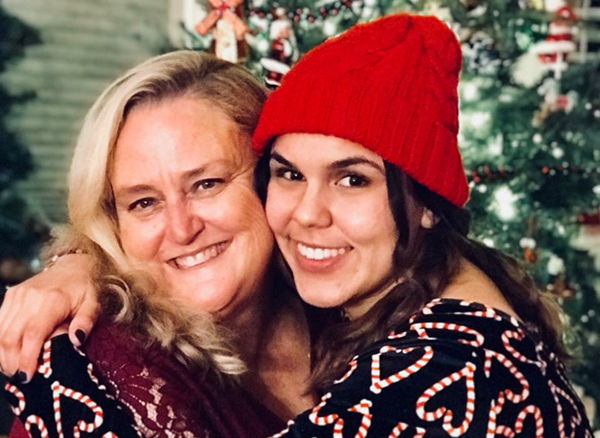 Danielle and her adoptive mom.

It won’t be long before children across the United States head back to school. Most of them will be excited about showing off their new clothes, saying hello to old friends, and meeting their new teachers.

But it’s an entirely different story for children who have been abused, neglected, or mistreated in other ways. These children don’t look forward to the start of school because they fear another year of struggle and failure.

Kids who have been in and out of various homes also have moved from school to school and often fall far behind in class. They can have very low self-esteem and think that others are judging them. They can barely concentrate on their studies as the uncertainty and pain of their lives consumes their thoughts. Or they act out to numb the hurt.

But there is hope! Thanks to your generous support, Olive Crest is reaching out to hundreds of these boys and girls this summer, providing them with the tools they need to succeed in school this fall.

Danielle knows what it’s like to struggle in school. As a child, she felt awkward and out of place, and couldn’t keep up with the other kids.

Born to parents who were addicted to drugs, Danielle was immediately placed in the child welfare system. When she was 2 years old, she was adopted by her loving grandmother. Tragically, a few years later, her grandmother had a debilitating stroke and couldn’t take care of herself — much less a little girl.

“I did the best I could,” Danielle recalls — but it wasn’t easy. The school soon noticed that she always seemed to be dirty and she was increasingly overweight due to her poor diet. She then went from one home to another — and at one point, lived with someone she remembers as “very mean, degrading, and mentally abusive.” This person told Danielle that she was “no better than her parents.” In yet another home, she was told that no one would ever want to adopt her.

She bounced around from school to school and never felt that she fit in. She developed an eating disorder and remembers how she sought to comfort herself with food. She desperately needed a good home life and a stable school experience. But things got worse before they got better.

Danielle was 10 when Olive Crest came into her life. For the first time, she was placed with a family that truly seemed to love and care for her. With Olive Crest’s help, her new family encouraged her and gave her the extra help she needed to catch up in school. She overcame her eating disorder and was thrilled when her foster mom asked her if she would like to be adopted into the family.

Thanks to the love, support, and stability of her new family, Danielle began to see herself as someone of value. She became friends with honor students and says that surrounding herself with good people made a huge difference in her life.

School Success and Stopping the Cycle

Because of the healing power of a strong family and their support, Danielle was able to overcome the obstacles in her way. Today, at 19, she’s a successful college student, having just completed her freshman year at Colorado State University. She plans on a career of helping others like her. She is so grateful for the life she now has because of Olive Crest, her new family, and your support.

Asked if she has any advice for kids who are struggling, Danielle says, “You are not a product of your parents’ mistakes. You create your own path, so surround yourself with greatness and people that encourage you.”

Thank you and God bless you for giving generously to help kids like Danielle succeed in school — and in life.